“Women Empowerment” is an often used word used for topics as varied as self protection against physical harassment to learning different vocations which in turn will make them eligible to earn their own living instead of being a burden on their relatives. Alternatively it will also help them to supplement their family income. GBK, as an institution, has its own limitation in terms of outreach and resources. It cannot therefore practice all initiatives associated with “Women Empowerment”. It adopts those methodologies which are aligned to its passion of making the poor and under-privileged self-reliant.

Capacity Building and training are tools that help the uninitiated to identify and adopt a trade which will expand their scope for earning. The organization provides different kind of trainings to its clients to support their dreams of achieving such targets.

GBK organizes medical and eye check-up camps in rural areas where it has its branches. Health services are generally offered to people  in areas where such facilities are either non-existant or are of inferior quality. Residents of these localities where GBK has its presence look forward to these events so that they can get an opportunity to get medical opinion on their state of health. Senior citizens, whose eyesight is damaged over the years, appreciate GBK’s efforts in helping them regain their vision.

GBK organizes medical and eye-check up camps in rural areas where it has its offices. Residents of those localities where GBK has its presence look forward to these events so that they can get an opportunity to get medical opinion on their state of health. Senior citizens, whose eyesight is damaged over the years, appreciate GBK’s efforts in helping them regain their vision. 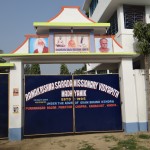 The organization emphasizes on quality education of children. It is providing scholarships to meritorious children belonging to economically poor families who can not afford the cost of books and uniforms. The organization is also running a boarding school in rural area of Purnanagar in Nadia district, named as Ramakrishna Sarada Missionary Vidyapith. Children studying in this school enjoy clean and healthy environment which encourages a holistic development of their moral, physical and spiritual character. GBK is taking care of this program with its own fund and has not taken any kind of financial support from any institution.

Objective of the organization is to ensure that children residing in economically backward areas get quality education in order to remain at par with children residing in urban and metro areas. The school building has been built on a property covering almost 3 acres of land surrounded by pollution free- excellent natural beauty to provide quality education to deprived children. The school started its operation in January, 2013. The School emphasizes in developing the morale of the upcoming generation to become decent human beings of the society. At present, 450 children are attending the school from nursery to class X out of which 250 children are availing the boarding facilities. Extra-curricular activities like yoga, meditation, spiritual learning, counseling and career guidance are provided to these children.

Poor sanitation and absence of sanitary latrine and defecating in open place by most of the households in rural area is the root cause of poor health & hygiene which is creating severe health hazard and affecting living standard besides poor economic condition. Considering the fact, SMGBK has taken initiative to play a significant role in collaboration with FINISH, a facilitating agency, in bringing initially Nokari, Raghunathpur-Hijoli, Debagram, Kamalpur Gram Panchayat of Nadia District where SMGBK is working for several years, under Total Sanitation Campaign (TSC) in terms of extending facilitation of planning and execution of Low Cost Sanitary Privy.

A base line survey, awareness generation & sensitization along with PRAs have already been conducted by the organization to determine key behaviours and perceptions regarding sanitation, hygiene, water use, ensuring the usage of latrine etc. during the year. Convergence of services following Nirmal Bharat Abhiyan (NBA) is under process. The organization has succeeded to bring all the major stakeholders like District Water & Sanitation Department, Block Development Office and Panchayat in one platform. More than 2000 households have been identified in first phase to provide low cost latrine with latest technology under the Sanitation programme.

With a view to address the issue of health hazards arising from the use of contaminated water by the people in its target areas, GBK has initiated a program called ‘AMRITBARI project’ in Purnanagar under Ranaghat block of Nadia district, with an eye to scale up the same in other districts of West Bengal also. The objectives of the project being,

It is expected that the RO water purifier plant will cover 5000 households in Purnanagar and surrounding area. The plant is situated within the campus of our Ramakrishna Sarada Missionary Vidyapith, Purnanagar. Water can be collected from the plant by using modern electronic cards and will also be available in 20 ltr sealed bottles at affordable price.

In my experience, poor people are the world's greatest entrepreneurs. Every day, they must innovate in order to survive. They remain poor because they do not have the opportunities to turn their creativity into sustainable income."

Small loans can transform lives, especially the lives of women and children. The poor can become empowered instead of disenfranchised. Homes can be built, jobs can be created, businesses can be launched, and individuals can feel a sense of worth again.